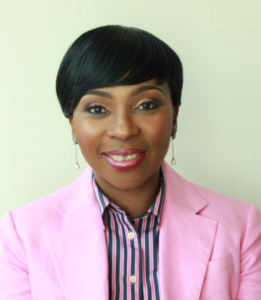 Pastor Tope Ade as she is fondly called by many was raised in an upper-middle class religious home in Lagos Nigeria. She attended a Catholic Convent School for her Elementary and High school education. She became baptized in the Anglican Church at the age of 3 and was also confirmed in the Anglican Church. She developed a passion for the Word of God by watching her maternal grandmother, Felicia, read the Bible daily and tell her stories from the Bible. Her mother, Matilda, later bought her the Golden Children’s Bible which became her favorite book.

As a child, she participated in several Bible Trivia Contests and at the age of 12 became very fascinated with the Book of Revelation and memorized many chapters of the Book. Pastor Tope has an inquisitive mind with a love for books.

During her final year in high school, one of her teachers told her about the plan of God for salvation and she accepted Jesus Christ as her Lord and Savior in June 1984. Pastor Tope received the baptism of the Holy Spirit in 1987.

She has been serving in the Church since the age of 10 and in 1987, one of her friends asked her why she was always in church and wondered if she was going to be a pastor. Pastor Tope’s response was, “I just love God and love to be in His house because that’s where I find fulfillment.”

In August 2008, the Lord spoke to her about a new assignment and in preparation for the new assignment, she had to go to Oral Roberts University. The vision for Liberation Call Christian Ministries was birthed during that encounter with the Lord and He reminded her of the Word He spoke to her in New York in August 1995, and said it was time to arise and begin to fulfill it. In obedience to God, she handed over the Church she planted and pastored in July 2009 and her family relocated from Sugarland, Texas to Prosper a suburb in Dallas, Texas.

Degrees and Certifications
Pastor Tope obtained a Doctor of Ministry Degree (Church Ministry & Leadership) at Oral Roberts University College of Theology and Ministry, Tulsa Oklahoma in April 2016, and also graduated with a Master of Divinity Degree in 2012 from ORU and a Bachelor of Education degree in 1990. She is currently working on a Master of Arts in Human Service Counseling at Regent University, Virginia Beach, VA.